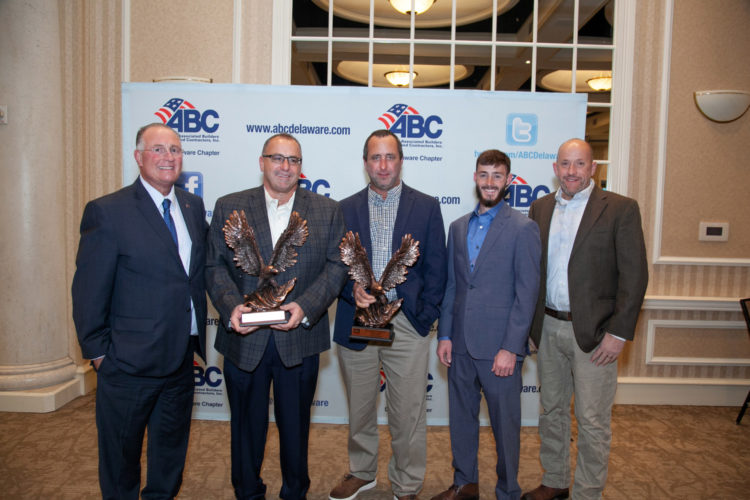 The Poplar Island spillway project was engineered by the United States Army Corps of Engineers in early 2018.  Originally, GFP Cement Contractors was not a part of this project; only after GFP Mobile Mix Supply (an affiliate company) was awarded as a supplier did GFP Cement Contractors receive a request to provide a complete turnkey package for the project.  This package included the design and development of a mass concrete mix that met all requirements of ACI 301-Section 8, the development and implantation of a thermal modeling and thermal control plan, and the installation of the mass concrete structure.

The craftsmanship of our foremen and crew ensured that the concrete and anchor bolts were set correctly for the steel spillway gate to be installed.  There was no room for error due to the logistics of the island restoration.

MEETING THE CHALLENGES OF A DIFFICULT JOB

GFP Cement’s project management team took charge of the onsite staging of cement.  The 120,000 lbs of blended cement had to be properly cared for along its journey to the island and while staged onsite. Cement was packaged in one-ton bags, double bagged, placed on a pallet and shrink wrapped for transit. White tarps were used to cover the cement for added protection from precipitation, dew, and saltwater spray while on the barge.

Thermal modeling resulted in the need to pour concrete at a target temperature of 65°F or lower.   Based on ambient temperatures, the way to achieve those temperatures was a combination of water conditioning the coarse aggregates with chilled water and batching with chilled water.  GFP assembled an onsite 40-ton chiller plant that ran a recycling loop on a 20,000-gallon frac tank filled with well water obtained from the island. The plant was powered by a 70-kw generator and provided 44°F water.   A sprinkler system conditioning the stone was fed off of the system and the concrete trucks were refilled with chilled batch water while reloading.

Crews were lodged near Tilghman Island and commuted via crew boat daily to install concrete forms and steel reinforcement cages.  Rough seas occasionally prohibited crews getting to and from the island.   At times, workdays were cut short to ensure safe transport of the crew back

to the main island. Strong winds and rough bay waters were a constant factor to be aware of. Due to the number of personnel required on pour day, an additional boat and captain had to be chartered to ferry everyone to the island in order to maintain the schedule. The commute on the water from dock to dock for personnel was approximately 20 minutes each way.  The barge for materials and equipment would take 3 hours each way.

Schedule changes due to weather were closely monitored and actively communicated to all parties involved as pour day became a moving target when a shift in weather made the transport of the volumetric concrete trucks impossible and thereby causing GFP Cement to shift a Saturday morning pour into a late, but successful, Sunday 18 hour pour.

One of the last challenges encountered, but most important was the extra care and precautions that had to be taken to ensure habitats on the island went undisturbed.  All land resources within the project boundaries needed to be preserved in their condition prior to start of work or be restored to a condition after the completion of construction that would appear to be undisturbed.

Our mission at GFP Cement Contractors is to provide superior concrete construction services for a multitude of public and private sectors of the construction industry. This was especially true with the logistically burdened Poplar Island project.  Through the teamwork of subcontractors, suppliers and a hands-on project management team, GFP Cement was able to ensure that the project ran as smoothly and efficiently as any mainland project.

The project specifications of fine and coarse aggregates required GFP Cement Contractors to purchase material from suppliers with quarries as far away as Pennsylvania.  Materials were hauled from the Pennsylvania quarries and then barged out from the mainland to the island.  Transporting the aggregates from mainland to the island required GFP’s project management team to coordinate with barge operators along with the timing of delivery from suppliers, while staying mindful of weather conditions needed for transport over waterways.

A total of four (4) barges were used in transporting of equipment and/or materials from the mainland to the island.  The first of four barges transported a crane, the second transported both fine and coarse aggregates.  The aggregates were both live unloaded onto the barge; however it was imperative that the two aggregates be kept separated during transport.  The barge operator installed a dividing wall between the two in order to assure non contamination of either aggregate.  In total, over 370 tons of sand and stone were delivered and live unloaded from trucks onto the barge for transport in under12 hours.  The third barge transported approximately 60 tons of blended cement/slag along with a chilled water plant, 20,000G frac tank and wheel loader.  The fourth, and most critical barge mobilization, contained four (4) volumetric mixer trucks and one (1) pump truck for the pour. GFP’s project management team prepared a deck loading plan to ensure trucks were loaded in the correct orientation to allow all five trucks to fit. Once loaded, there was very little deck space between the five 72,000 lbs trucks.

Material quantities were carefully checked before ordering, and deliveries were closely monitored to ensure timely delivery for loading and transport to the island.  Again, there were small windows of opportunity available to load, barge the material and offload at the island.  Every stage of this project and plan execution involved the teamwork of three or more companies working together resulting in seamless execution.

On the island, GFP workforce provided the layout and supervised the staging of the materials area established to quickly reload and cycle the volumetric trucks for the 140-yard pour.  Sand, stone, cement, admixtures and chilled water were all staged in a manner that allowed each component to be loaded simultaneously.  Proper planning and hands on supervision allowed for trucks to be loaded efficiently and turned around allowing for a continuous pour without interruption.

INNOVATION IN CONSTRUCTION TECHNIQUES OR MATERIALS

GFP Cement Contractors utilized CMT Services Group’s technology to perform thermal modeling for the pour as well as remotely monitor concrete temperatures during the curing stage.  Over 14 sensors were cast into the concrete form, all of which output thermal data to be logged and available for live access using cellular technology.

The onsite production of concrete was performed using four state of the art volumetric mixer trucks.   GFP Mobile Mix Supply trucks are fully computer-controlled mixers.  A mix design is entered into the computer and the computer controls the feed rate of the sand, stone, cement, batch water and admixtures.   Additionally, with the manual entry of moisture contents for fine and coarse aggregates, the computer can automatically correct batch water to account for the free moisture content. The option to add fiber reinforcement to a concrete mix is also available on these trucks.